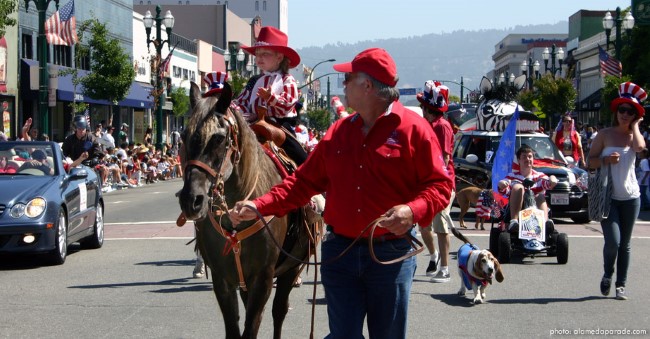 The Alameda 4th of July Parade is one of the largest and longest Independence Day parades in the nation.

ROUTE: Lincoln Avenue between Grand Avenue and Park Street. Start at Park Street to Otis to Grand to Central to Western. This is one of the longest such parades in the country, coming in at 3.3 miles! It includes over 170 floats and 2,500 participants.

Schedule: Before the Parade is The R.A.C.E. It is a five km (3.1 mile) run and walk through Alameda starting at 9:45AM just before the 4th of July Parade. The course starts at 1417 Park Street in front of the Bank of Alameda and follows the Alameda parade route ending at Haight and Webster in front of the judge's stand. Registration: alamedarace.com

3.3 miles! The Mayor's Fourth of July Parade is the longest route in the country coming in at approximately 3.3 miles! Line-up (starting at 8 AM) takes place along Lincoln Avenue between Grand Ave and Park Street.

Alameda, Calif. -- The Alameda 4th of July Parade is one of the largest and longest Independence Day parade in the nation. With over 170 floats and 2,500 participants who travel a three mile route, the parade has become the central activity of the Bay Area's Fourth of July weekend. The parade boasts the longest route in the United States, drawing over 20,000 spectators from the region.

It is a tradition for many families to return to the same spot along the Parade route to celebrate the Fourth of July year after year.

Other Alameda events you might enjoy include: Alameda Sand Castle Contest and Tree Lighting Ceremony at Christmas. Events are deemed reliable but are not guaranteed. Please confirm details before going.