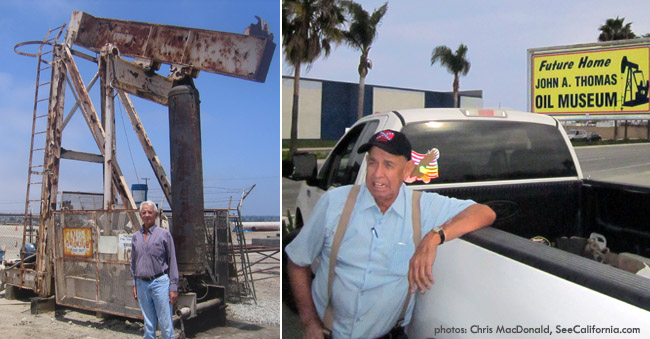 UPDATE: The Oil Museum May Be On Hold -- Permanently

John A. Thomas, the former Huntington Beach City Councilman and longtime oilman, passed away on March 2, 2014 but he won't be forgotten. Thomas' oil wells continue pumping and a close friend had hoped to create a museum in his honor.

"People need to know that Huntington Beach was once called 'Oil City' and that tourists are able to drive here because of it," he said. "They still are. More than 85% of the tourists coming here drive. They can see oil fields from the Bolsa Chica Wetlands, HB City Beach, Dog Beach, Bolsa Chica State Beach and other areas. Oil is still helping drive the economy." -- Ron Brindle


"He was born to be an oilman," said his pal, Ron Brindle, a landscape contractor, who sought to create "The John A. Thomas Oil Museum" on his 19-acre property at 18851 Golden West St., between Ellis and Garfield. The museum was expected to be open in 2015--but plans fell through.

"When he was 3, his mom found him climbing his dad's wooden oil derrick," Brindle said. "He had oil in his blood. John worked 7 days a week, 365 days a year checking his wells throughout the day and night. Men like John built this country and he deserves a museum."

Brindle gathered old gas pumps, signs, oil derricks, different types of wells, pulling rigs and much more. There was even an old Thomas truck and tanker, along with his 15-foot tall miniature wooden oil derrick. (His dad used to build real wooden oil derricks and was active in Long Beach and all over.)

The museum was planned for both outdoors and indoors and was to have a mural with John's picture and a wooden oil derrick on the front of the large building facing Golden West.

Thomas still has wells pumping on his partner's property, including one that Brindle says is the city's deepest--2 miles down.

"People need to know that Huntington Beach was once called 'Oil City' and that tourists are able to drive here because of it," he said. "They still are. More than 85% of the tourists coming here drive. They can see oil fields from the Bolsa Chica Wetlands, HB City Beach, Dog Beach, Bolsa Chica State Beach and other areas. Oil is still helping drive the economy."

Thomas, who was an oilman in Huntington Beach for 45 years, began serving the city as a councilman in 1978 and was later Mayor Pro-Tem. In recent years, you could find him volunteering to help whenever an oil crisis occurred.

When one oil company had a leak near Golden West, Thomas was the first on the scene, cleaning it up. In 2013, when another company's oil derrick buckled, Thomas had his crane on the scene securing the rig so it would not come crashing down on nearby buildings, as he watched nearby.

At his Bolsa Lease, off Edwards near Ellis, I once asked him if he was running out of oil and if houses would be built there, like on the nearby old oilfields. He turned to his grandson, sitting next to him, and said, "There's so much oil down there, my grandson will be pumping it years from now."

He showed me where this oilfield includes "Bolsa Chica #1," HB's first oil well, which helped trigger the first of five major oil booms that turned the town into "Oil City." This lease land ironically overlooks the surf that's given the town another moniker, "Surf City."

Thomas' family, which includes John, Jr., runs the business now and Brindle said they didn't know his plans to honor their dad with a museum. "They'll be surprised when they spot my 'Future Home of John A. Thomas Oil Museum' sign on Golden West. But I wanted to do this because I never had a better friend!"