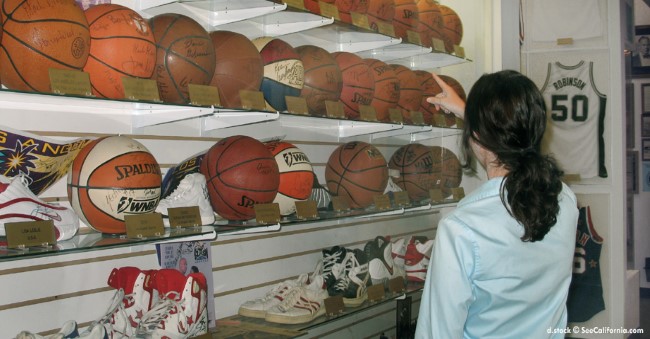 CLOSED: This museum is closing its doors permanently in 2014, according to the owner.

Newport Beach, Calif.--Across the street from beautiful Fashion Island shopping mall is an equally exciting place to visit called the Newport Sports Museum. With one of the biggest private collections amassed, on exhibit you'll find something for every interest. There are well over a dozen sports represented ranging from football, baseball, basketball and golf to a local Newport Beach favorite, surfing.

With big shoes to fill at the Newport Sports Museum, owner John Hamilton isn't intimidated by the size 22 shoes worn by Shaq. One of the many unique items on display to inspire youth to stay out of trouble, Shaquille "Shaq" O'Neal's shoes stand side-by-side to the basketball shoes worn by stars Karl Malone of Utah Jazz, Bill Walton of Portland Trailblazers, Kareem Abdul-Jabbar of Los Angeles Lakers and Julius "Dr. J." Erving, world famous basketball Hall of Fame honoree. Basketball isn't the only game in the museum that allows kids and adult to wander, learn, and dream.

Everybody has a favorite, says an employee working at the museum. We liked the Presidential Golf Exhibit with golf bags and clubs from presidents ranging from "Ike" to Richard Nixon.

One visitor liked the footballs of Heisman trophy recipients that includes nearly every possible football that can be obtained. But when forced to tell us his favorites, he chose:

Located in a building that bares the name, Hamilton Company, the museum is hosted in the owner's business enterprise with its very own dedicated space.

When you find the museum, stop at the front desk to grab your Scavenger Hunt list. You'll find plenty to keep you engaged in this fantasy world that treats guests (for free) to some of the coolest sports memorabilia and collectors items on the planet. Balls, clothes, shoes, tickets, towels, trophies and accessories from famous athletes are some of the surprises.

The bottom has a wall mural painted like a baseball stadium and you can sit on actual stadium seats retrieved from sports stadiums around the U.S. In this lecture hall, an exhibit pays homage to "The Negro Baseball Leagues". Black & white photos of the founding teams and narratives on a story board document the early years of baseball.

On the main level of the museum, exhibit rooms are arranged by sports categories. Baseball, basketball, football, hockey, golf, surfing & skateboarding are prominently featured, as well as tennis, Olympic Games, soccer, boxing and other sports such as volleyball and swimming.

"I really like the golf section," said museum owner, John Hamilton, a handsome man who proudly sports a smile and discusses the mission of the museum. Standing in front of the the golf collection, five presidents' golf bags are on display: Dwight D. Eisenhower, Ronald Reagan, George W. Bush, Gerald Ford and Richard Nixon. The most flamboyant of these is a bright red, leather bag with "General Ike" engraved in white letters

A sizeable portion of his personal collection helped launch the museum, and although Hamilton has been gathering sports memorabilia since he was 12, he couldn't have put the museum together on his own, he said. Singularly-focused in his goal to inspire youth and keep them on track, he credits the museum's success to sponsors and their donations. Pointing to many adults who shared his dream, "If a kid can stay out of trouble, can keep from doing the wrong things and be inspired by the successes of our American icons, our museum has fulfilled its true mission," he said.


Several thousand children annually attend the museum on field trips where they learn about a variety of sports, often shown in displays that follow the history of say, the golf ball, or the football helmet. Once you visit the Newport Sports Museum and see the massive collection, it becomes clear that biggest shoes to fill may not be Shaq's but John Hamilton's. This man who followed his very own dream and built an incredible sports museum in Newport Beach, has created something of timeless value to inspire.