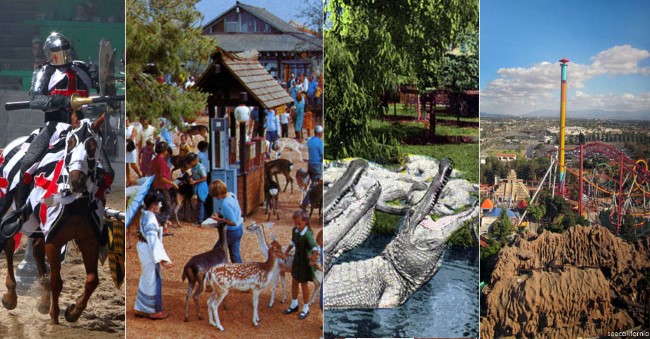 Buena Park, CA—The United States has more Theme Parks and Entertainment Centers than any other country in the World. And for more than 70 years, many say the "Capitol City for Fun is Buena Park," whose motto is, "Where Fun Finds You." No wonder the lively town translates to "Good Park."

In 1887, James A. Whitaker founded the city after purchasing 690 acres of land for a cattle ranch. But he ended up subdividing the property and the only stampedes since then have been tourists coming to town to have fun in the many theme parks and attractions that have called the North Orange County city, "home."

Cordelia and Walter Knott helped put the pleasant place on the map with her home-cooked chicken dinners that sold for 65-cents in 1934. Her cooking was so popular that by 1940, over 4,000 chicken dinners were sold on a single Sunday, prompting "human gridlock" and incredibly long lines of hungry customers, patiently waiting their turn.

Lines became so long that Walter decided he better give them something fun to see or they might leave. So, the Old West fan, whose grandparents came from Texas to California in a covered wagon, created a Ghost Town, with a Chinese Laundry, Jail, Saloon and the like. He and his helpers got real relics and made it look authentic, complete with wild characters like Sad Eye Joe and Whiskey Pete. It was such a good idea that the Ghost Town started becoming almost as famous as Mrs. Knott's Chicken Dinners.

Walter even moved the 1868 Gold Trails Hotel from Prescott, Arizona to his "town," then created a section for covered wagons and added a show. Knott's Berry Farm was on its way to becoming World Famous and continues to evolve and attract millions of visitors every year. It now even has its own hotel (you can stay at) and a "down home," family friendly feeling of fun.

Be sure and also see Independence Hall, which Walter proudly built to honor our country. At 8039 Beach Boulevard, it's free to visit and you can see the impressive hall towering across the street from the main Knott's. Cedar Fair, Knott's current owner, also operates Soak City USA, not far from Independence Hall.

In 1953, The California Alligator Farm was created nearby on two acres off La Palma Ave. It featured more than 500 alligators and crocodiles. Billed as "the largest reptile collection" around, the amazing place included 500 snakes.

Some of their alligators were used in movies, such as "Tarzan." Hollywood stars like Lucille Ball and Michael Landon often visited the fun farm, where 13-foot gators intrigued kids from 2 to 102.

(The original "farm" dates to Arkansas in 1906, the brainchild of Joseph "Alligator Joe" Campbell and Frances Victor Sr. A year later, it was moved by train to Los Angeles, before eventually making its way to Buena Park, where Francis Earnest Sr. and Jr. made it one of the country's top attractions for 30 years, sometimes drawing more than 130,000 people annually.)

While Knott's and the Alligator Farm were packing the tourists in, Allen Parkinson opened yet another major tourist attraction nearby, the Movieland Wax Museum in 1962. Over 60 wonderful, life-size figures, including Laurel and Hardy, The Three Stooges and the Wizard of Oz stars, became the talk of the town. Clever print ads, like "While you're in Buena Park, why don't you visit Elizabeth Taylor," made the museum a hit. Stars flocked to the attraction, putting their foot and handprints in the cement out front. Some, like Sammy Davis Jr. posed alongside their wax figures, proving it was hard to tell one from the other.

In 1967, Allen Parkinson created another major attraction, the Japanese Village and Deer Park, which opened on 32 acres near Knott Avenue and Artesia Boulevard. It was called "The Largest Japanese Cultural and Recreation Center in the Western Hemisphere" and "The First and Only Deer Park in America." Known for its Pearl Divers, Koi Ponds, Green Gardens, Tea House and Dove Pavilion, guests could actually feed dolphins.

(After the theme park closed, the venue reopened for a year as The Enchanted Village in 1976. Animal Trainer Ralph Helfer was one of the owners at the village, which had the Lost Island Theater, Amazon Cliff Divers, Bridge of Enchantment, Gentle Jungle Theater, Wilderness Theater and Tiger Arena. It was home to a variety of fascinating animals, including giraffes and Oliver "The Human Chimp.")

In 1970, Jim Brucker, and his son Jimmy, opened Movie World Cars of the Stars & Planes of Fame Museum on Orangethorpe Ave. For 9 years, it featured Hollywood cars from Bonnie and Clyde, the DeSoto driven on the TV hit, Happy Days, Charlie Chaplin's own 1929 Rolls Royce and over 200 other auto and aeronautical beauties.

In the early 1980s, The Kingdom of Dancing Stallions brought thundering hooves of Andalusian horses to Beach Boulevard in Buena Park.

Although it ended in 1984, two years later, Medieval Times Dinner and Tournament brought horses and a four-course feast to a 70,000-square-foot facility on Beach, where guests cheer for knights jousting atop their steeds. The popular attraction is still a "must see" when visiting Buena Park.

Also, in that year, Ripley's Believe It or Not Museum made its debut on Beach in a 10,000-square-foot space that brought the oddities of life to view for 19 years.

One of the greatest attractions to open on Beach has been Pirates Dinner Adventure in 2006. Billed as "The World's Most Interactive Dinner Show," it features aerial artistry, swordplay and lots of swashbuckling action.

The $25 million Butterfly Palladium is being built on the property with an expected opening in 2019. Visitors will be able to step inside a simulated Costa Rica rainforest, surrounded by thousands of butterflies. A 45-foot-tall artificial mountain is being constructed, along with a 3D movie theater.

Also, be sure and check out the fantastic Buena Park Historical Society, located at 6631 Beach Boulevard in the city's Historic District, where you can see a variety of memorabilia in the Whitaker-Jaynes House Museum.

The society has photos, artifacts and much more from most of the attractions mentioned in this story. There are even fascinating photos and information on theme park mogul Allen Parkinson, who almost launched another major attraction, Shangri-La. A fascinating photo shows Allen and Movie Star Gina Lollobridida looking at concepts for the park modeled after the 1937 Frank Capra movie, "Lost Horizon." It was never built because of financing and the site became the Japanese Village and Deer Park.

You'll also see photos and memorabilia from one of the most famous women's softball teams in the 1940s, 1950s and 1960s. The Lynx Women's Softball Team of Buena Park was nationally famous for its skilled players, like Carol Spanks, Marion Harvey and Betty Schlegel. It even had a developmental team called the Buena Park Kittens. The Lynx traveled around the country bringing pride and national recognition to Buena Park.
We recommend visiting the Historical Society, open Monday-Thursday, Noon to 4pm and by appointment (historicalsociety.org; 714-562-3570).

On the Beach Blvd. side of the Whitaker-Jaynes House, you can see the amazing Dreger Clock, which was in Knott's Berry Farm for 50 years.

Friendly Art Brown, who has been Curator at the Historical Society since 2011, will not only answer your questions but give you a self-guided tour booklet of the impressive facilities. It details the interesting history of the 1887 Whitaker-Jaynes House (The bed of Walter and Cordelia Knott is on display inside), 1884 Bacon House (built by an unknown squatter; James Bacon, born in the structure, became famous for developing the Bacon Avocado), First Congregational Church, Stage Stop Hotel and more.

Next door, the old hotel, where passengers stayed overnight while traveling by stagecoach, has wonderful travel informationand you can purchase tickets for theme parks and attractions.

There's even a bench out front where you can take "wow" photos of your family with actual Knott's Old West characters.
There's just so much you can do in Buena Park, whether you're a first time tourist, a regular visitor or a local resident. To find out more, go to visitbuenapark.com.

Other attractions in Buena Park include Knott's Berry Farm.