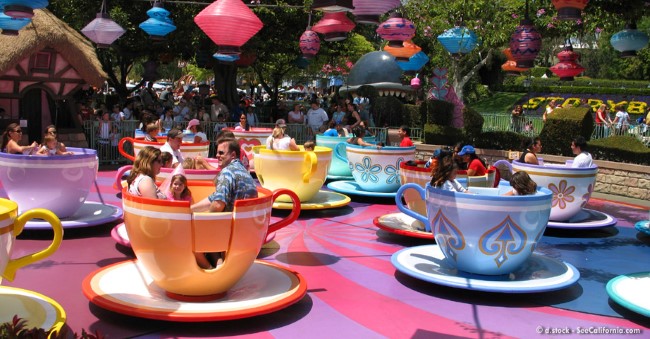 Anaheim, California-- When the Mad Tea Party opened at Disneyland on Oct. 1, 1971, heads were spinning with excitement at the new ride that made some dizzy, but set expectations high for the future of the Magic Kingdom in Anaheim.

Launched long after Fantasyland was unveiled (July 1955,) Mad Tea Party was a colorful ride in which guests climbed into their own teacups with handles, and decorative ornamentation. Each cup holds several people who sit in a circle around the main steering wheel that allows guests to grab on and begin spinning it faster and faster.

Each Disneyland theme park has a version of the teacup ride with newer versions able to operate even in the rain. The original California Teacup Ride must shut down if it rains too much.

Derived from the Unbirthday Party scene of Disney's Alice In Wonderland, a great song plays, "A very merry un-birthday to you, to you!"

Alice in Wonderland, the Disney film production was released in 1951 by Walt Disney as the 13th in the Walt Disney Animated Classics series by RKO Radio Pictures. Based on the childhood classic, Alice's Adventures in Wonderland, by Lewis Carroll, the film adaption added Through the Looking-Glass touches.

The book , Alice's Adventures in Wonderland, was written in 1865 by English author Lewis Carroll. The fantasy story is about Alice, a girl who falls down a rabbit hole into a world filled with unusual and intriguing creatures.

Chapter 7 of the book, A Mad Tea-Party, has Alice as the guest at a tea party with a Hatter, March Hare, and a sleeping Dormouse who remains asleep for most of the chapter. The characters give Alice riddles and stories. The Hatter tells Alice that he has tea all day because time punished him by eternally standing still at 6 pm (tea time). Alice decides this is the stupidest tea party that she had ever been to and decides to leave. Perhaps "Mad" Tea Party is a double entendre for Alice being mad and leaving, and the characters at the party being crazy - mad.

While you can travel the globe and find this ride in Fantasylands - Mad Tea Party at Disneyland California - Walt Disney World Florida - Alice's Tea Party at Tokyo Disneyland - Mad Hatter's Tea Cups at Disneyland Paris - Mad Hatter Tea Cups at Hong Kong Disneyland, the original version for those seeking authentic California and authentic Disney is in the heart of the original theme park in Anaheim, CA. That ride has delighted literally millions of children and adults since its inception 40 years ago. Hats off to the Mad Hatter!

History of the teacup: Around 206 to 220 B.C. the original vessels used for preparing tea in China were bowls with no handles. Later designs of teacups, especially in England, included handles. Many tea cups in England and Europe are made out of china and some have handles while others do not. Handles offer the most convenient and easiest method of not burning your hands should the tea be too hot.