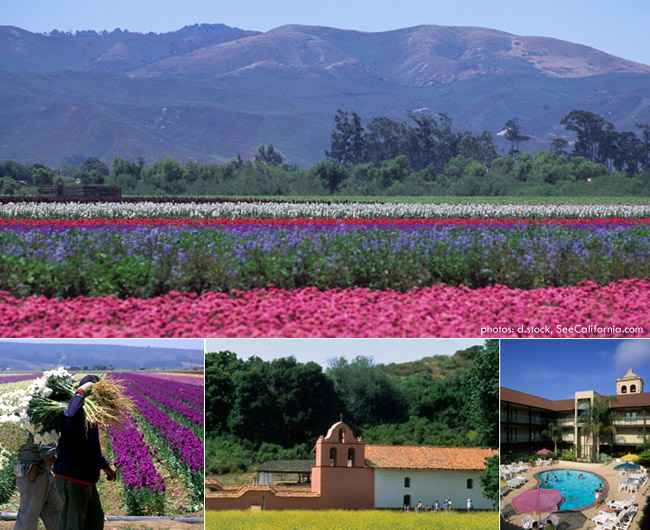 Much attention was brought to the “Made in the USA” concept when an 80 year-old company, Kit-Cat Clocks, hosted a float in the 2012 Rose Parade and could not find red carnations grown in California or the U.S. to complete its American flag design on its float.

The California flower industry has been hard-hit by the global push to buy products at the cheapest costs. The beautiful flower fields of Lompoc that were a tourist attraction for many years, simply had to fold when South America began selling their flower products that included seeds and cut flowers at cheaper prices. Yes, it’s all about cheap. While Lompoc still hosts a Flower Festival and Parade, they’ve shifted focus to art and wine, now that the flowers are mostly a memory.

Yet the love of flowers hasn’t died in California. In fact, you can thank the owners of the Carlsbad Flower Fields for purposefully keeping them open to entertain and delight tourists in late March through May. There are Daffodils to see in the spring at Daffodil Hill in California Gold Country, and in Lancaster you can see the wild California poppies growing during the California Poppy Festival.

As the Asian Lunar New Year festivals begin in January with markets opening this week in some places, culminating in celebrations throughout the state such as a Chinese New Year Parade in San Francisco or Tet Festival in Garden Grove, there will be thousands of flowering plants sold, some from California and many from elsewhere. The most important celebration for Chinese, the New Year, includes outdoor, temporary markets where people go to buy symbols of the new year, along with gifts to give. Among the flowers and plants people buy much as Christians buy Christmas trees to celebrate Christmas, the Cymbidium Orchid is a favorite. Here are other flowering plants purchased to celebrate the New Year and the meaning attached to them: