California Pumpkins are Growing and Getting Ready to Set Records

Pumpkins love California sunshine, and they grow abundantly throughout the land. There are very few places where you probably can't grow a pumpkin in California, in fact, and growing them is the basis of a celebration in Half Moon Bay called Half Moon Bay Art & Pumpkin Festival. The annual event includes many pumpkin themed events, including a contest to see who can grow the biggest pumpkin. Does 1,500+ pounds sound big enough? Pity the poor child who has to help his dad or mom pick that one up and put it in a truck to take to the festival!

Though Half Moon Bay is a beach city known for its famed Mavericks where the world's top surfers go to ride the BIG WAVES measuring up to 70-80 feet, it's also known for its big pumpkins. It's a place where people like to live life large. 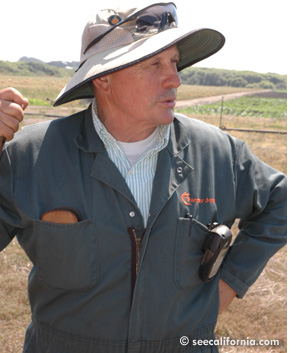 One such resident is Farmer John, who has grown pumpkins and other plants, vegetables and fruits on a beach-close farm that his family cherishes as a tradition. The farmer is passionate about his heritage and strong roots, living and working on the land in Half Moon Bay. He struggles like so many small farmers in California to keep his venture going as big conglomerates dominate everything from genetically modified (GMO) corn and seeds to managed foods that you never really know where they came from. You can visit and see Farmer John's Pumpkins, his fields, and even watch the flowers, vegetables and fruits grow! Location: 850 North Cabrillo Highway, Half Moon Bay, CA. Call: (650) 726-4980. farmerjohnspumpkins.com

Farmer John says it's hard to compete, but he continues on because he loves growing on the land-and he loves pumpkin season. His pumpkins include Atlantic Giants: 250-500+ lbs grown on the farm, Cinderella and Fairy Tale, Pump ke mon and Carnival, Blues and Greens, Whites and Reds, Funny Face, Jack Be Little, Lumina (White), Red (Red Kabocha, Red Kuri), Speckled, Howden, Sugar Pie and Jumpin' Jack and Mini Pumpkins of different shapes and sizes.

When traveling along California's roads and byways, we've noticed many pumpkin farms have disappeared in recent years. One of our favorites in Solvang was suddenly gone several years ago, and when we called to find out why, the family said they got old and couldn't maintain it anymore.

However, the Halloween season associated with pumpkins continues to grow in California, and pumpkins have become an integral part of the celebrating. From pumpkin pie to ice cream or bisque, there are lots of delicious pumpkin foods that offer healthy benefits.

When to grow a pumpkin:

If you haven't planted your seeds already, you're too late for the fall pumpkin contests. Pumpkins are typically planted when the ground temps reach around 60 degrees, with flowers appearing at about 10 weeks after the seeds are planted. It will take between 100-140 frost free days for the pumpkins to be ready for harvesting.