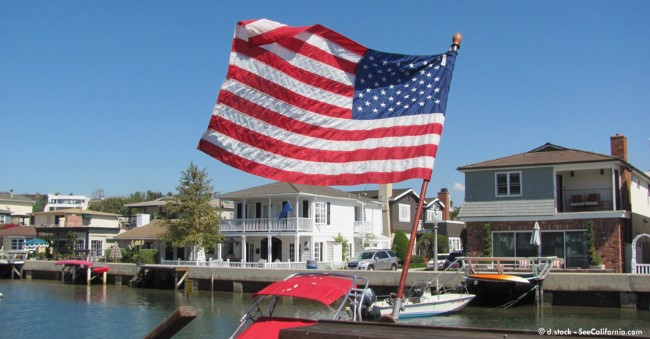 Balboa Island --Marine Avenue on Balboa Island is only three to four blocks long. That's the width of this manmade Newport Beach island, in fact. As you drive or walk along the busy street filled with restaurants and boutiques, turn on Park Avenue near Hershey's Market and and walk over the small bridge to Little Balboa Island. It is even smaller than Balboa Island and contains the homes shown in the photo.

Several of the homes look like mansions, and most look like cute beach cottages or comfortable two story houses overlooking the bays of Newport Beach where the sun shines, boats bob in the bay, and American flags wave in the breeze.

Newport Beach is made up many such enclaves of small islands with their own communities, beaches, bays and comfortable living.

Little Balboa is seen on the map as the right hand portion separated by the major section by a blue line, representing water in the bay. The street lining both sides of the bay is called Grand Canal.

The Island Bridge publication announced in Spring 2021 that the retaining walls near the bridge were being replaced and big changes were to come. While boats previously could pass under the bridge, the new bridge would not allow for that but would add up to 400 parking spaces for visitors. While the Italian flavor would be forever changed, guests routinely complain about parking shortages.

The island has a marker in the ivy next to the Balboa Island Fire Station. In addition to that marker, the thin strip of gardening in the center of the small road as you enter the island from the bridge (either on foot or by car) includes several miniature Cape Cod style lighthouses that adorn the tiny greenbelt.

For walkers out on an exercise / sightseeing trip, the walk around Little Balboa can add an extra 10 - 20 minutes to your island walks. It is especially festive during the holidays such as Christmas and 4th of July.