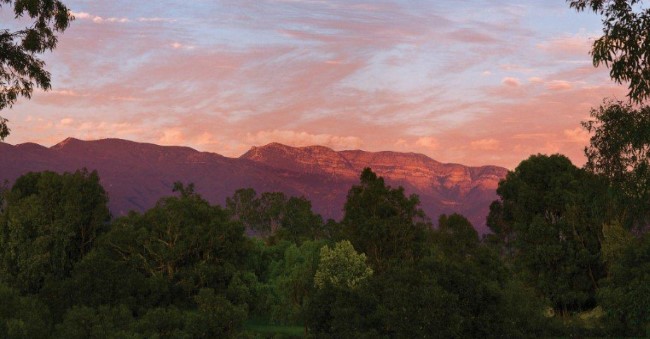 Fly me to the Moon - in OJAI

There's something special about Ojai that people can't quite explain. After listening to so many "oohs" and "ahhhs" you want to grab them and ask, "What is it? Why can't you tell me?"

1. Pink Moment when everything is awash in shades of pink, lavender and peach as the sun descends and disappears from the famed valley. Watching the mountains and sky light up is something you never forget--but then there's the moon.

2. The Moon: Ojai, the Chumash word for "moon," is honored each evening when the Pink Moment fades and the moon comes into view, often lighting up the valley with its own unique glow.

3. Earth: Farms & orchards dot the landscape as you drive into and out of the Ojai valley. The focus is on healthy, wholesome and natural.

4. Hospitality: B&Bs, spa resorts and charming hotels are more than places to stay. They are are people to meet and friendships to bring you back to Ojai again and again.

It's easy to see why the Chumash Indians loved the area, only 20 minutes from Ventura and the Pacific Ocean. Daylight, sunset and the glorious moon provide the backdrop for enjoying fragrant orange groves, spectacular farms and a rural sense that's restful for the soul.

When the day begins in Ojai, make the most of it by hopping into a Cloud Climber Jeep and embarking on an unforgettable journey to secret gardens, then up a mountain to a sacred place Chumash have visited for thousands of years. My tour guide, Greg, is the Renaissance Man of the Central Coast. He stopped many times to teach our group about herbs and plants used by the Chumash, but the highlight came when we reached the mountain peak. Greg helped us out of the Jeep, and within minutes a pair of red-tailed hawks soared in the sky above, checking us out--everyone was speechless! Greg played the flute he made from plant materials in the area, demonstrated his hand-carved bull roar, then thanked the earth for providing the powerful experience we shared.

After lunch in the shade of the secret garden, our tour concluded with a visit to Old Creek Ranch Winery and Ojai Olive Oil (ojaioliveoil.com) where I was excited find a source for cold pressed, mandarin flavored olive oil which was made solely from fruits grown on the farm premises.

Back to the hotel to shower off the dust before an evening out watching a live theater performance, my Peacock villa at Su Nido Inn (Spanish for "nest") was such a delight! Located just two blocks from downtown, my suite included a granite top kitchen, living room with fireplace, bedroom and a spacious bathroom with separate shower & spa tub--all custom crafted. The guest journal inside "The Peacock" sang its praises as the finest accommodations you'll find, and I agree! (sunidoinn.com)

Su Nido Inn's Mission Revival architectural style compliments Ojai's downtown and its centerpiece landmark, the Ojai Post Office Bell Tower and Sidewalk Portico at 201 E. Ojai Ave. They are listed as Ventura County Historical Landmark No. 26, along with an old sycamore tree in nearby Libbey Park. Edward Drummond Libbey, Ohio glass magnate who spent winters in Ojai, donated the civic park and hired San Diego architect Richard S. Requa in 1914 to design the tower along with a series of prominent Spanish-style buildings for the city.

Libbey Park proudly opened its annual Ojai Music Festival in June 2011 with a $4 million renovation of the Libbey Bowl, designed by Ojai architect (and former mayor) David Bury. The outdoor venue where the music festival made its debut in 1952, includes 26 rows of functional, dark green plastic seats. The stage and the clamshell-style band shell arcing over it were raised by 6 feet and turned slightly to the west, away from the nearby tennis courts.

Those tennis courts are home to the internationally-acclaimed annual amateur tennis tournament, The Ojai, which celebrated its 111th season in 2011. Nearly every tennis star has played at this event over the years, enjoying its beautiful park setting and sense of history. Thousands of spectators attend the four day tourney, which takes 600 volunteers to produce.

When you visit Ojai, bring your tennis racket and appetite. Not far from the public courts there are over 50 restaurants and eateries. Here are some of my favorites:

Bodee's Restaurant (bodees.net) is set along scenic Highway 33 less than five miles from downtown Ojai. Family-owned and operated for more than 60 years, the menu features locally grown produce and food sources. I ordered a delicious, colorful margarita (on the rocks) brightened with a slice of blood orange grown right on the ranch the restaurant owns. Touting its Barbecue Baby Back Ribs, I chose Bodee's Signature BBQ sauce to top it off. It lived up to its reputation. The serene outdoor dining terrace sidelined by a waterfall is the ideal choice for special occasions and events.

Osteria Monte Grappa (OMGojai.com) in downtown Ojai features an extensive menu of family recipes from the Italian proprietors, Stefano and Tammi Bernardi, who also own Via Vai and Pane e Vino in Montecito. Everything is fresh, tasty and the service is superb. You can eat indoors or out on the shaded patio.

Azu Restaurant (azuojai.com) in downtown Ojai features casual elegance and quality cuisine from Chef Laurel Moore, who grows her own produce in the Azu vegetable garden & carefully selects her meat and produce from local Ojai farms and ranches. Her eclectic California Spanish menu includes both Vegetarian and Seafood Paella, Rack of Lamb, and many favorites with a twist. Classically understated, the place is hopping on weekends when the out-of-town crowd returns.

Ojai Cafe Emporium (805-646-2723) serves the tastiest cinnamon rolls and fresh baked muffins anywhere. Go for the breakfast and sample the and fantastic omelets!

Before or after a satisfying meal, be sure to walk around the town. Poke your head into some shops and meet friendly locals. At the Lennon Closet (805-640-3695) Debbie Lennon has pictures of her famous relatives, the Lennon Sisters, who first gained national fame on The Lawrence Welk TV Show and are still performing after 55 years as America's Sweethearts of Song. Gently used apparel comes from top sources--maybe even some actresses and singers, though names are not revealed. Another boutique, Cowgirl's Closet (805-646-6200) sells couture Western apparel with leather, lace and denim that can be worn for many occasions.

For your mind, body & soul be sure to stroll the streets extending one to three blocks from Ojai Ave. Soul Centered (soulcentered.com) in the bright pink cottage on N. Montgomery is owned by a former actress who fell in love with Ojai and knew it was her calling to stick around and help others. The store offers classes, clinics, tarot card readings and crystals, to name a few items. Another talent from L.A. made her way to a weekend retreat in Ojai and also liked the vibe so much, she had to move there and launch a shop, Made in Ojai (madeinojai.com). The store carries unique, crafted cards, clothing, gifts, books and CDs from local sources you probably wouldn't find on your own. Take time to browse and learn about the incredible people who crafted the items. Ojai House (ojaihouse.com) features American-made, Fair Trade, recycled, upCycled, organic, green and functional art for the house & garden. It's a treasure trove to explore. Got Clay? That's the name of a class taught by the master, Frank Massarella, at Firehouse Pottery & Gallery (firehouse-pottery.com). You can drop by to look at and purchase fabulous collector pieces, or sign up for classes such as Mud Maniacs or Mud Meditation.

With something exciting around every corner, I can't assemble the Ojai jigsaw puzzle in one visit. Like thousands of other visitors, I'm longing to take another trip to the Moon (Ojai!)

For your Ojai vacation, let the professionals at the Ojai Visitors Bureau give you some tips: OjaiVisitors.com or 1 -888-OJAI NOW