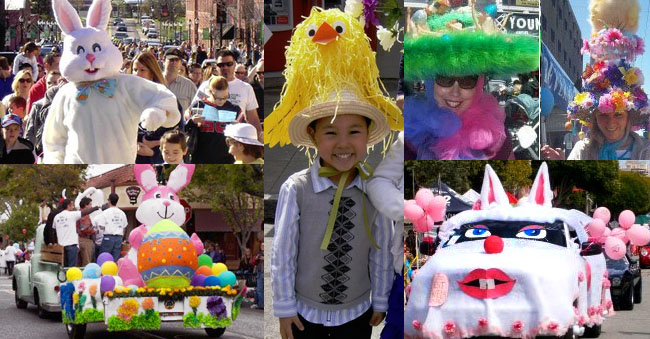 In your Easter Bonnet with all the frills upon it
You'll be the grandest lady (fella) in the Easter Parade.

This event was held the day before Easter! April 20, 2019, 9-11 a.m. at Skywest Golf Course
HARD (Hayward Area Recreation & Park Distric) is hosting the 74th Egg Hunt and Bonnet Parade. Bonnet Parade registration will begin promptly at 9:00am. The Bonnet Parade, lead by the Bunny will begin at 9:30am. Bonnet Parade participants must be 6 years and under and all bonnets must be homemade and worn by the participants during the parade to qualify. Participants will have their homemade bonnets judged in the following categories: the prettiest, most unusual, and most colorful. The egg hunt will immediately follow after the Bonnet Parade. haywardrec.org

This event was held the day before Easter! April 20, 2019, 10:30 a.m. with prizes for Best Hat / Bonnet, Best Costume, Best Themed Group and Most Creative Float. cityofsanmateo.org

This event was held the day before Easter! April 20, 2019 , 10 a.m. Caledonia Street from Johnson to Dunphy Park. sausalito.gov

Davis Breakfast with Ester Bunny and Egg Hunt  includes Easter Parade from Bunny Breakfast to Egg Hunt and back. Usually held the Saturday before Easter.

SAN FRANCISCO: California doesn't try to compete with New York when it comes to Easter Parades. However, our own special brand of decor and style is definitely on parade on Easter Day at San Francisco's Union Square Easter Parade, complete with a bonnet contest and hats beyond belief!

CAMPBELL: If you want to opt for something smaller and a little less crowded head to Downtown Campbell where the annual event where anyone can register and join in includes a Scottish bagpipe band, dignitaries in convertibles, often wearing sets of bunny ears, and maybe a few cars decked out like Easter Bunnies.

MAMMOTH LAKES: Annual Village Easter Parade with the Easter Bunny and Woolly is usually held on Easter Day. One of the few parades where there's a likelihood of snow for making snow bunnies. mammothmountain.com

Davis: It's a short parade downtown, bicycles are invited and decorations encouraged.

San Mateo: Head for Central Park for the city's signature Spring event with plenty of entertainment, an egg hunt and small parade.