San Francisco, CA Things to Do 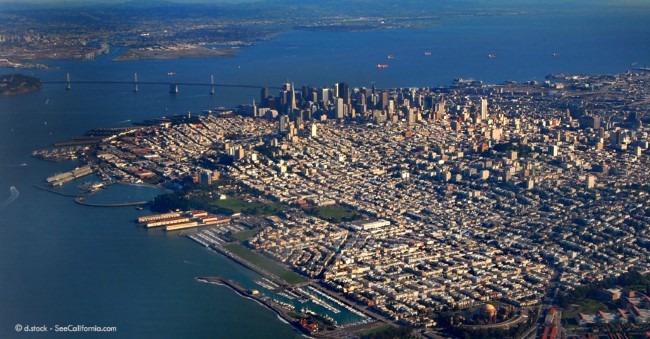 Whether visiting or living in this California destination, there are many things to see and do.

Red & White Fleet is a tourist attraction, a boat ride around the bay, a bay cruise that takes visitors to past some of the city's highlights visible from the water, compiled tips on things to see and do from locals. Here are some ideas for you!

Recently re-landscaped parts of the Lands End park where you can walk around the old Sutro Baths allow visitors to stand in the location
of a scene from the classic movie Harold and Maude,

Buy a bottle of 2005 Pinot Noir from Treasure Island Winery, plus some cheese in North Beach. Then, walk up to Coit Tower to arrive at about 4:30 p.m. Take the elevator to the top of the Tower, open the bottle of wine and enjoy with the cheese. Remember that the Tower closes at 5 p.m. Complete the experience with a short walk down to Fisherman's Wharf and take Red and White Fleet's Sunset Cruise.

Warming Hut in the Presidio near Fort Point is a great place to go in the morning for a hot drink and breakfast roll…maybe find a small gift or two for relatives and take a view-inspired stroll along Crissy Field. This is also a great place to begin or end a stroll or run along the bay. It's filled with great sights of San Francisco, the Golden Gate Bridge, Alcatraz, Angel Island, the Marin Headlands, in and out bound ships and the occasional sailing or outrigger regatta. There's an old fishing pier that gets you over the bay and up close to some salty locals, a sandy beach, grassy picnic area and lots of historical spots to visit like Presidio's pet cemetery, stables of the Buffalo Soldiers who were stationed here in the late 19th century and the old Coast Guard station buildings. When there are waves, you can almost reach out and touch the surfers next to the Fort Point Rocks.

Trot up the Lyon Street steps for a quick, intense work out.

On Sundays, rent a bike at Pier 43˝ and ride to Fort Mason. There is a great farmers market, where you can buy a complete meal of fruits, vegetables, pastries, bread, drinks, coffee, etc. Then, enjoy your snack or meal at one of the many bayside benches or ride to the Marina Green or Crissy Field. For the more ambitious of bicyclists, ride to the center of the Golden Gate Bridge where you can enjoy the view and a delicious meal.

Pack a picnic lunch and bring it on board a rented boat at Golden Gate Park's Stow Lake.

Walk the decks of the tall ships, stroll along Hyde Street Pier, home of the world's largest historic ships collection, where visitors can board several National Landmark vessels.

If you're looking for a little pampering, check out Cocoon Day Spa, which was voted the best Spray Tanning by Allure magazine and has won many awards in all areas of service. And, while you're getting a treatment, they provide you with free Champagne!!

The Shakespeare Garden in Golden Gate Park is a favorite place. It is located next to the Academy of Sciences and is quiet, laid back and a perfect place to relax.

Consistently ranking as one of the top vacations in the U.S., and one of the most unique cities in the world, it is easy to see why the classic crooner Tony Bennett left his heart in San Francisco, the most romantic city on earth. The awards and accolades by the media are endless, but what's priceless is the real experience, itself. San Francisco should be on your list of places to see before you die, or better still, places to return to at least four times.

While San Francisco once declared it was the biggest city in the Bay Area, San Jose passed it by some years ago and has over a million people, while San Francisco is surrounded by bays, the Pacific Ocean and sits on hills with little room to expand. The city grows by about 10,000 people annually, and currently is under 900,000.

The nation's fifth largest metropolitan region registers a population of 6 million when combined with San Jose / Silicon Valley. It hosts just under 20 million visitors, conventioneers and business travelers each year, and the best way to get San Francisco is to fly into San Francisco Airport (SFO.) Beware that fog sometimes cancels flights in and out of the city, especially in mornings and late afternoons. From the airport you can catch BART (Bay Area Rapid Transit) train directly into the city a few miles away. There are plenty of taxis, so you may want to weigh out the cost of a shared taxi ride with BART tickets that at last check were under $10.

Things to do in San Francisco:

Take a cable car ride. Cable cars climb up and down the steep streets

sporting panoramic views of beautiful San Francisco bay. Everybody wants to ride them, so there's often a wait on busy days.

Visit Fisherman's Wharf and colorful Pier 39 where street artists perform daily. Though it may seem a bit touristy, the Pier area has a rich history spanning the early days of the Gold Rush when goods were shipped into the wharf in the fast-growing city. Special events, museums and attractions, dining and shops all are located in and around the pier.

See Alcatraz Island - Once a prison where it was believed that no man ever escaped and lived to tell, today you can take a boat ride over to the island and take a self-guided tour. Special events include tours of the gardens and other aspects of the island, owned and operated by the National Parks.

Visit Golden Gate Park - One of the nation's prettiest parks and home to museums, a Japanese Tea Garden and events such as free concerts, the park is well worth the visit.

Walk on the Golden Gate Bridge. You can park your car and walk across the pedestrian walkway that goes across this world famous bridge.

Take in a theatrical show. Popular events includes Beach Blanket Babylon, and Teatro Zinzani. zinzanni.org. For those who love dance, San Francisco Ballet is one of the finest ballet companies in the U.S.

Eat out! San Francisco is known for its multi-ethnic cuisine ranging from Italian to Chinese. There are several individuals and companies offering food tours but our favorite is offered through GraceAnn Walden. theyummyreport.com