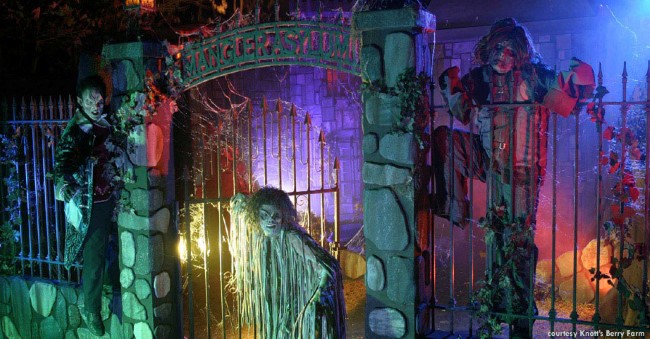 It's no secret among the scare crowd eager to hop in a car or on a flight to see some of the best Halloween events, that 2011 is looking good at California's top Halloween attractions. In 2010 we met up at Queen Mary's Dark Harbor with scare fans who drove down from the Bay Area to Long Beach to see the new attraction. "We'll go anywhere for a good scare, and unfortunately the Bay Area doesn't compare in this realm," said one of the college student travelers.

There are some sure bets in the scare biz and it's not hard to figure them out. The two vying for top honors and prizes are Universal Studios Hollywood's Halloween Horror Nights and Knott's Berry Farm's Scary Farm Halloween Haunt. Knott's has the oldest of the California haunts and the biggest by far, employing and casting 1,000 actors for the event. It's fantasy never stops as the entire theme park is invaded by zombies and blood-sucking vampires. Traditional scare tactics work here, and the theme park offers thrills based on people's fears -such as bozo-style clowns that start out funny and begin to creep into your mind like a bad dream.

The rival for Halloween thrills is Universal Studios Hollywood, a relative newcomer to the theme park Halloween scare business, by comparison. What Knott's does with quantity of actors and props, Universal makes up for with studio effects. Owning rights to some famous scare movies, Universal rolls them out.. read more!