Year of the Dragon Celebrated with Big San Francisco Parade 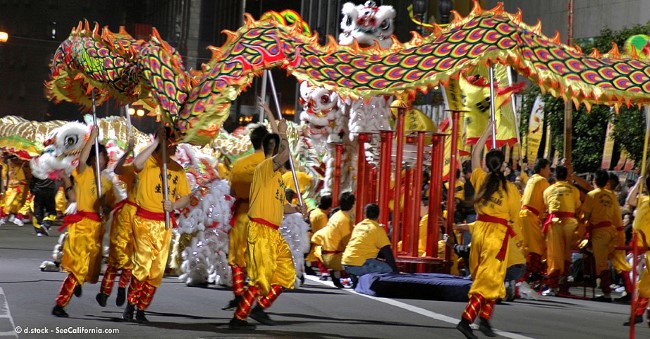 When many of us blow our whistles and shoot off our fireworks on Jan. 1, 2012, the Chinese and Asian neighbors on the block will just smile, knowing that their Chinese celebrations will be bigger and generally more spectacular.

If you have never attended a Chinese New Year event or Tet Festival & Parade, you’re in for a treat. Like Christmas, there are traditions with potted flowers sold during flower market events to give as gifts, little cards with money for the kids and gourmet foods. You also will probably light a candle at an alter, as one of the many traditions surrounding the holiday. And last but not least, you’ll look for a celebration or parade with fireworks shows and dragon dancers. You can start planning now to see the huge Chinese New Year Parade (chineseparade.com) held annually in San Francisco. In 2012 the event is planned for Saturday, Feb. 11, at 5:15 p.m. It goes on for several hours and is considered the biggest Chinese parade in the U.S. You might want to see the Golden Dragon Parade if you live in Southern California and prefer not to travel to San Francisco. It is a daytime parade, while the San Francisco event takes place at night.

Parade route: The parade starts on Market, goes up Geary, down Post and ends on Kearny at Columbus.

I saw the amazing San Francisco Chinese New Year Parade by accident when staying at a hotel (Hotel Nikko) near the parade route while attending a conference. I opted out of the first evening dinner, and wandered from my hotel to grab a bite, but mostly was greeted with hoardes of people and barricades being put up on the streets. Instead of eating, I stuck around with a great view spot and experienced the colorful display of costumes, dances, music and floats. Each year is the year of one of 12 animals, snakes or other creatures that are the theme tied into many of the floats and displays. 2012 is the Year of the Dragon, and that’s an easy theme to carry out since there are always dragon dancers in Chinese parades.

The Dragon Symbol and Your Birthday:

If you were born during the year of the dragon between any of the dates below, you are well poised to enjoy the most powerful, elite symbol of 12 in the Chinese Zodiac:

Dragons symbolize power, wealth, dominance and ambition. Dragons prefer to live by their own rules and if left on their own, are usually successful. They’re driven, unafraid of challenges, and willing to take risks. They’re passionate in all they do and they do things in grand fashion. Unfortunately, this passion and enthusiasm can leave Dragons feeling exhausted and interestingly, unfulfilled.

While Dragons frequently help others, rarely will they ask for help. Others are attracted to Dragons, especially their colorful personalities, but deep down, Dragons prefer to be alone. Perhaps that is because they’re most successful when working alone. Their preference to be alone can come across as arrogance or conceitedness, but these qualities aren’t applicable. Dragons have tempers that can flare fast!