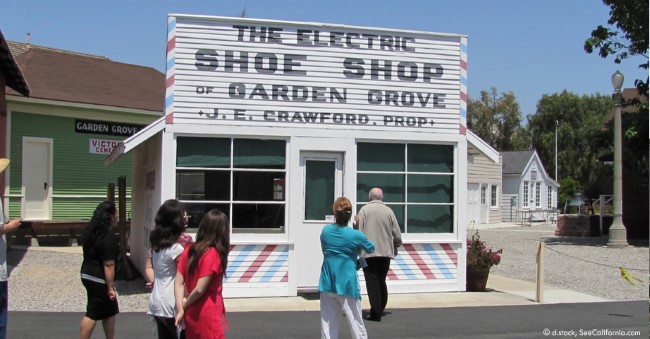 See the garage that was Walt Disney's Studio, plus much more

GARDEN GROVE, CA--One of the most interesting and enjoyable tours in the state takes place at 1:30 p.m. on the first and third Sunday every month at the Garden Grove Historical Society's Stanley Ranch Museum and Historical Village at 12174 Euclid St., Garden Grove. (Special tours for 8 or more during the week can be arranged through the office, 714-530-8871)

Delightful, knowledgeable docents lead you on a 1-2 hour tour, where you'll enter history through several fascinating buildings, including the garage, used as a studio by Walt Disney in 1923. It was then located at his Uncle Robert Disney's North Hollywood property. Walt reportedly worked on his animation machine to produce cartoons as well as drew his characters in the garage. There's a precious photo of Walt by it and an assortment of Disney memorabilia inside. The structure was donated, dismantled, then reassembled at its current location. Several former cartoonists and friends of Walt, including Mickey and Minnie, helped dedicate it's rebirth just a few miles from Disneyland.

There are 16 other incredible historical buildings located on two acres of the Stanley Ranch that were donated to the historical society by Agnes Stanley in 1970. A year later, her son, Emerson, donated the Ware-Stanley House, a barn and tankhouse.

Be sure to get a superb brochure on the museum and village that explains in detail the history of the buildings as well as what's inside them. The Ware-Stanley House was built in 1891 by Edward Ware, a horticulturist, who co-developed the Eureka walnut and introduced the first Valencia orange trees to the area. Several other structures were donated and moved to the impressive historical village over the years, many fortunately saved from demolition, to educate and entertain current and future generations.

You'll see the old Schoolhouse, where visiting student programs put pupils back in the 1890s; they wear earlier era costumes and learn from McGuffy Readers, write on slates and sit at antique desks. A Post Office, built in the 1880s, has package weighing scales, letter-sorting boxes, a postal carrier bike. You'll see a Barber Shop and Electric Shoe Shop as well as an early dental room, complete with equipment, and the medical bag and other memorabilia from Pioneer Garden Grove Physician Dr. C. Violette, who lived to be over 100!

The Schnitger House, a California bungalow from 1916, has displays of early Garden Grove businesses and a photography collection of vintage cameras. Part of Arthur and Helen Schnitger's residence is dedicated to early musical instruments and shows off a piano, clarinet, horn, accordion and other instruments as well as fascinating period furniture and appliances.

The village even has a replica of the first Fire Station, complete with Garden Grove's first fire truck, a 1926 La France, a 1926 smoke mask, signal lanterns and other firefighting apparatus and even a letter from Gov. Ronald Reagan to the retiring fire chief. And we've just scratched the surface of what amazing sights are in the village. There are plows and other farm equipment, a lumber building, blacksmith shop and auto garages (plans call for the Reeder Garage to be part of an oldtime gas station). Be sure and visit the general store, where you can purchase historical books, vintage postcards, special t-shirts and other items.

We want to thank Head Docent Nancy Phillips and Docents Jim Stainer, Larry Porraz, Megan Galway and all the hardworking volunteers at the Garden Grove Historical Society for keeping history alive through their passionate tours. This is one of the neatest historical villages around. There are others in San Diego, San Jose and some additional spots in California. We'll let you know about them in future. Stay tuned to seecalifornia.com. Thank you.