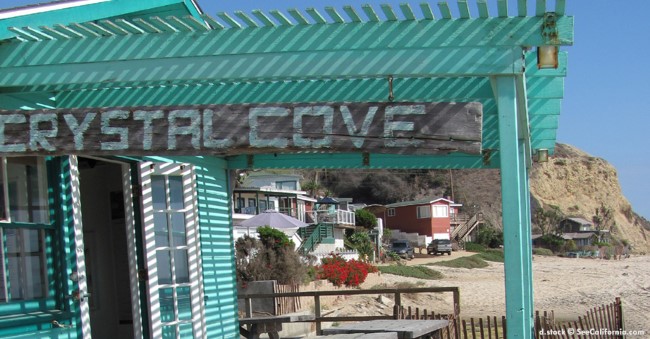 Crystal Cove is a treasure any time of year. Several years ago when the State of California claimed back historic cottages that were on lease to private residents, these cottage homes were renovated and brought up to rental standards to be made available to the public. So coveted are the beach abodes that the waiting list to try them out during a vacation can be a year or longer. What's all the fuss?

Crystal Cove is a beach community of Newport Beach with the ocean portion and beach operated by the State of California, while the inland side across Coast Highway (1) contains a shopping promenade and expensive hillside homes offering ocean views. For those who visit, the main attraction is the beach. An upper beach region is set on a plateau overlooking the Pacific Ocean. It features trails, wild grasslands, a visitors center, restrooms and signage signifying particular points of interest.

As you descend a hill to the beach which is accessible by a free tram from the paid parking lot, a charming beach community looks like a throw back to the 1900's with its cottage, palapas, Beachcomber Restaurant, and ocean front to explore. The beach contains both sand entry paths and some eroded rock entrances where people can beachcomb and look at the sea life visible during low tides. For the day-tripper, Crystal Cove is a great visit with a more rustic look & feel than neighboring Corona del Mar to the north (part of Newport Beach, as well) or Laguna Beach to the south of another beach region (El Moro) undergoing renovation after mobile homes were removed in a similar manner to the state's effort at Crystal Cove.

During the special winter season the beach lights up with festivities in a very merry, very Southern Californian, and totally delightful way. The annual Crystal Cove Coastal Tree-Lighting Ceremony is usually held the first Saturday in December. transforms historic cottages at Crystal Cove with holiday lights, vintage decorations, giant candy canes, classic cars and Frosty's distant cousin " Sandy ," a snowman made out of sand. Festivities will begin at 3 p.m. and include holiday tunes performed live by jazz vocalist Brenna Whitaker, hot apple cider provided by The Beachcomber Café and a special visit from Santa Claus. Guests can stick around at sunset and be the first to see the lighting of the only holiday tree displayed on the beach along the California coast. The event, hosted by Crystal Cove Alliance, is free and open to the general public. For those who can't make the ceremony, the Coastal Tree and cottages will remain lit and decorated throughout the holiday season.