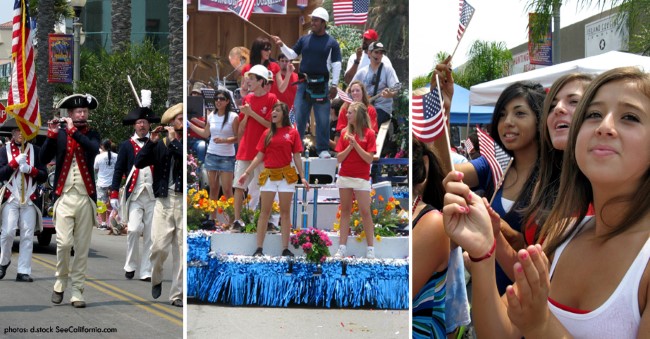 California has the longest, shortest and biggest parades you'll find on the 4th of July. With over 100 parades there's bound to be one close by for you and your family to enjoy. 4th of July is the biggest "parade" holiday in the state with more parades hosted than even Christmas and winter holidays. All parades are free to see and they range from splashy productions to home-spun, join-in operations for kids, dogs, and push carts, to name several. Go see a California parade and wave your flag!

ALTURAS: Fandango Days Parade July 6, 2019, 10:30 a.m. alturaschamber.org Downtown Alturas and the Alturas Chamber of Commerce parade on Main Street
The Fandango Day's Parade down Main Street is followed by a full day of family fun and entertainment at Veteran's Memorial Park. Theme: Hats Off to America

Since 1874, the city of Modesto has celebrated the 4th of July with a parade through downtown.   All American Festival 11 a.m.-3 p.m. Location: Tenth Street Plaza, 1010 10th Street. Activities for Kids, Live Music, Food and Craft Booths. modestojulyparade.com

NEWPORT BEACH: Bike Parade, Boat Parade Watch out for the water spray from the fire boats, as a whole host of boats float by, decked out in their finest red, white & blue. American Legion Yacht Club, americanlegionyachtclub.com

SAN GABRIEL Kids 4th of July Push Float Parade July 4, 2019, 9:30 a.m. Plaza Park, 428 South Mission Drive, in front of the San Gabriel Mission and continue North through the Mission District, continue East on Broadway and conclude at Smith Park, 232 West Broadway. Free, but you must register in order to be in the parade. Kids, ride your decorated tricycle, bike or scooter, or walk in the parade. Activities at Smith Park include watermelon eating contest, barbeque, games and entertainment. sangabrielcity.com

SONOMA: 4th of July Parade on the Plaza, 10 a.m. Winds around the historic Plaza. 60+ entries. After the parade, enjoy an old-fashioned festival with food, drink and game booths. At dusk above General Vallejo's field for the spectacular fireworks show that lasts approximately 45 minutes. sonomavolunteerfirefighters.org

Begins at Truckee High School, down Donner Pass Road into historic Truckee, ending at the corner of Bridge and Church Street. Free to see, truckeechamber.com

VALLEJO: 4th of July Parade July 4, 2019, 10 a.m. Theme in 2019 is "A Salute to America". Route begins at Broadway and Tennessee, then turns left on Sonoma Blvd, then right on Georgia through downtown where it ends at Mare Island Way. Grand Marshal is Kenny Ross & Family.  Held for more than 165 years, this is a must-see parade with patriotism and pride throughout the entire route. vallejojuly4.com